I still remember clutching Margaret Atwood's story collection, Wilderness Tips, in my arms as I went to the library to write during my first year in graduate school -- reading one of her stories, then immediately scribbling lines of my own, as if some of Atwood's intelligence, clarity, complexity might sprinkle onto the page.

So it was a thrill to interview Atwood about her new collection, Stone Mattress, for The Washington Post. The Post interview appeared today, and here's two more questions that didn't make it in.

Atwood talks about these stories being a hybrid of realist stories and tales. 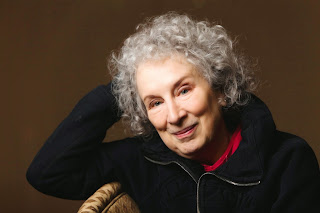 Why did you want to push that boundary?

You chose the story “Stone Mattress” – in which a woman kills a man named Bob who’d raped her in high school – as the title story. Is old age, often depicted here, a stone mattress?

Well, it’s where Bob ends up. I never thought about it like that. The thing about a good title is it has many meanings. “Stone Mattress” was irresistible to me because it was such a rare conjunction of words. It’s a transliteration of the word for a stromatolite. There’s a resonance as well with the well-known song from the Mexican revolution, called “Bed of Stones.” So is old age a stone mattress? Let’s find out.