A Christmas Gift for Language Wonks?

The linguist and writer Stephen Pinker has written a new style book, "A Sense of Style," which tries to be less rules-y than some books, using common sense, he says, rather than rigid rules.

In my interview with him in The Washington Post, he said that mistakes such as "who" for "whom" (or vice versa) bother him less than murky, imprecise language -- with the first, the reader at least knows what the writer means.

Our interview risked getting immersed in wonky grammar questions such as whether it's okay to use "prevaricate" to mean dither, rather than lie -- which I hear all the time in Britain. At one point, he looked up a British dictionary and found that "dither" was a more common usage in the UK than the US, and therefore more acceptable.

This could have gone on for hours... but I restrained myself, and kept those bits to a minimum.

And so, the interview. 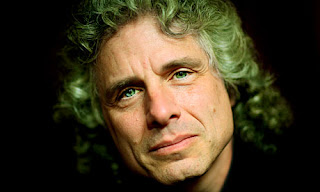