Donald Hall on 'Essays After Eighty'

What a privilege to be able to talk to Donald Hall last month. It felt like having talking to him over a glass of wine, maybe some cheese and olives. The former poet laureate is now 87, says he can no longer write poetry -- and so instead, is writing essays, made into this book, "Essays After Eighty."

Here's a more complete transcript of one of our exchanges about writing, which didn't make it into today's interview in The Washington Post.

CB: It sounds like you take as much care with each sentence and word in these essays as you did with your poetry. 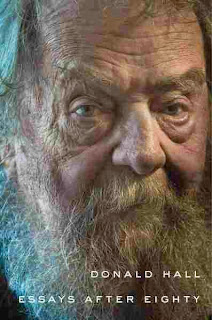 DH: But many of my poems took 90 or 100, more like the prose now. I’ve always been slow. I’ve known people, poets, they’ve written too many poems but they write very quickly. Robert Creeley is a poet I admire, I saw him once sit across the room, and write a poem – and it was pretty good! It wasn’t one of his best ones. But I was amazed! Well, I knew other people did it. There’s no telling. There’s a million ways to work at writing, and nothing is better than the other: It’s what suits you. It’s what you can do. I don’t think my revising made me a better poet than Robert Creeley. We both found our way of doing it. I knew a few poets who probably took more drafts than I did. WD Snodgrass, and Donald Justice – they may have even taken longer. But I know many who took less time. I didn’t mind taking more time. I’d heard of writers who say they hate to write. Not me. I love to do it. I would do it every day. To make sure I could write about that, I always wrote at least a little bit on Christmas Day.

DH: That was a poem I probably thought was good but now I don’t like so much. “Another Elegy.” It was more about the death of my friend, James Wright.
No comments:
Newer Posts Older Posts Home
Subscribe to: Posts (Atom)