Her upcoming book of reviews and essays, “See What Can Be Done,” highlights a more generous character: Lorrie Moore the reader. 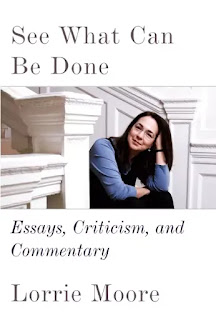 In more than 60 of her reviews and essays — many from The New Yorker and The New York Review of Books — Moore explores, analyses, weighs up, all with an openness to the work at hand. Interlaced with pieces about politics and current affairs, there are reviews of books by John Cheever, Amos Oz, Ann Beattie, Donald Barthelme, Richard Ford, Darryl Pickney, Peter Cameron, three pieces about Alice Munro, and many others -- a reader's dream.

From my interview with Moore for The Washington Post, here's one of my favorite exchanges:

Carole Burns: I am wondering if, in conversation at work or with friends, if you come up with the witty, biting repartee we all wish we'd thought of on the spot, or if, like the rest of us, you think of them the next day - or when you're writing.

Lorrie Moore: I don’t think of there being witty, biting repartee in my work or my life. My recollection is that there are mishearings and misunderstandings, slips and falls into the cracks of disconnection, and general awkwardness. There is despair that rises up and causes the mind to go to forbidden places. Humor is almost always an accident or a desire to be kind and jolly and one can discover it all around—in the world of one's fiction and outside of it as well. As for my friends—we are all brilliant and amusing when not tired.
No comments:

Jennifer Egan at 'Writers in Conversation'

I was thrilled to have Jennifer Egan start off her U.K. book tour for Manhattan Beach, her first novel since winning the Pulitzer for A Visit From the Goon Squad, by speaking to my students in "Writers in Conversation," the reading series I run for the English department at the University of Southampton. 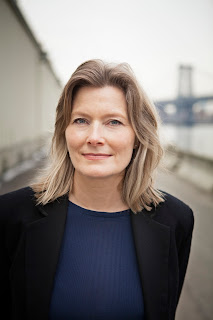 She read from both those books and answered questions from me and our students, some from our BA English programme, some from the MA Creative Writing, and a few working on novels for their PhD.

We've captured the event on our Youtube channel -- Enjoy! .
No comments:

The stories in James McBride's latest book, Five Carat Soul, is a quirky collection: with characters ranging from a group of a group of middle school boys in a band called "The Five-Carat Soul Bottom Bone Band" (a song in itself), a insatiable toy collector who might or might not 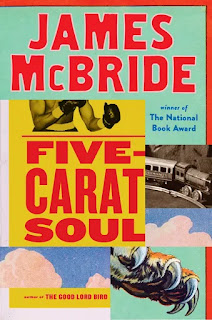 cheat a poor family out of a valuable toy, and a young African American boy in the Civil War named Abraham Lincoln, it gives a colorful and varied view of American life and its people without falling into the usual simplifications. When a Chinese grocer who shoots a young black man assumed to be robbing his shop, the villains aren't who a reader might think they'd be.

For me, the highlight of my interview with him for the Washington Post involved an exchange about politics, which he says he tries to avoid. Fiction, he said, is a relief from politics.

Most of my characters: they don’t yell, they don’t scream. They don’t curse, by and large. They’re good people. And you know what? Good people don’t have to be boring. The really interesting parts of life are the parts we are not witness to. Because the man who decides to shake his neighbor’s hand, or help him cut the grass, they’re the true heroes. Only with disasters like the one in Houston are we able to see our humanity. So these stories give me the room to breathe. Fiction offers some relief from the drudgery of sitting on the third rail of race, where most of us sit or avoid. Fiction allows us to dream. Without dreams what do you have? Fiction gives you real hope."
No comments:
Newer Posts Older Posts Home
Subscribe to: Posts (Atom)